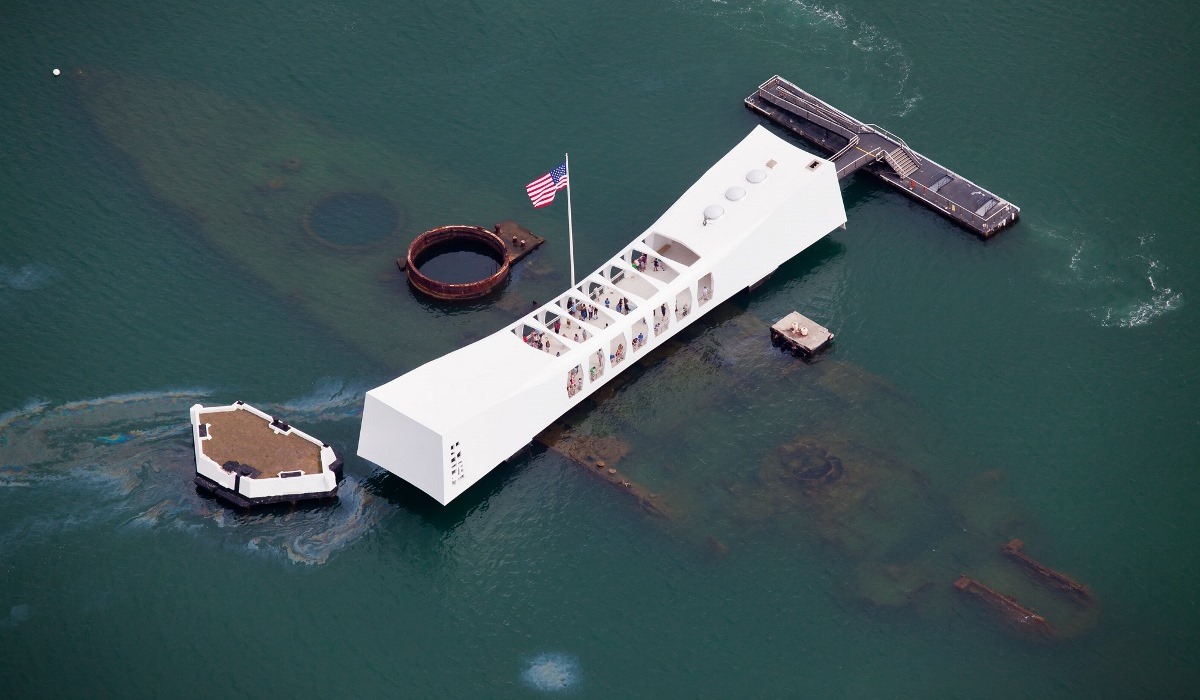 The USS Arizona is the final resting place for many of the ship's 1,177 crewmen who lost their lives on December 7, 1941. The 184-foot-long Memorial structure spans the mid-portion of the sunken battleship and consists of three main sections: the entry room; the assembly room, a central area designed for ceremonies and general observation; and the shrine room, where the names of those killed on the Arizona are engraved on the marble wall.

The USS Arizona Memorial grew out of wartime desire to establish some sort of memorial at Pearl Harbor to honor those who died in the attack. Suggestions for such a memorial began in 1943, but it wasn't until 1949, when the Territory of Hawaii established the Pacific War Memorial Commission, that the first real steps were taken to bring it about.

Initial recognition came in 1950 when Admiral Arthur Radford, Commander in Chief, Pacific (CINCPAC), ordered that a flagpole be erected over the sunken battleship. On the ninth anniversary of the attack, a commemorative plaque was placed at the base of the flagpole.

President Dwight D. Eisenhower, who helped achieve Allied victory in Europe during World War II, approved the creation of the Memorial in 1958. Its construction was completed in 1961 with public funds appropriated by Congress and private donations. The Memorial was dedicated in 1962.

According to its architect, Alfred Preis, the design of the Memorial, "Wherein the structure sags in the center but stands strong and vigorous at the ends, expresses initial defeat and ultimate victory....The overall effect is one of serenity. Overtones of sadness have been omitted to permit the individual to contemplate his own personal responses...his innermost feelings."

Contrary to popular belief, the USS Arizona is no longer in commission. As a special tribute to the ship and her lost crew, the United States flag flies from the flagpole, which is attached to the severed mainmast of the sunken battleship. The USS Arizona Memorial has come to commemorate all military personnel killed in the Pearl Harbor attack.

Also check out the cooperating association of hte NPS: Pacific Historic Parks and their Facebook page.