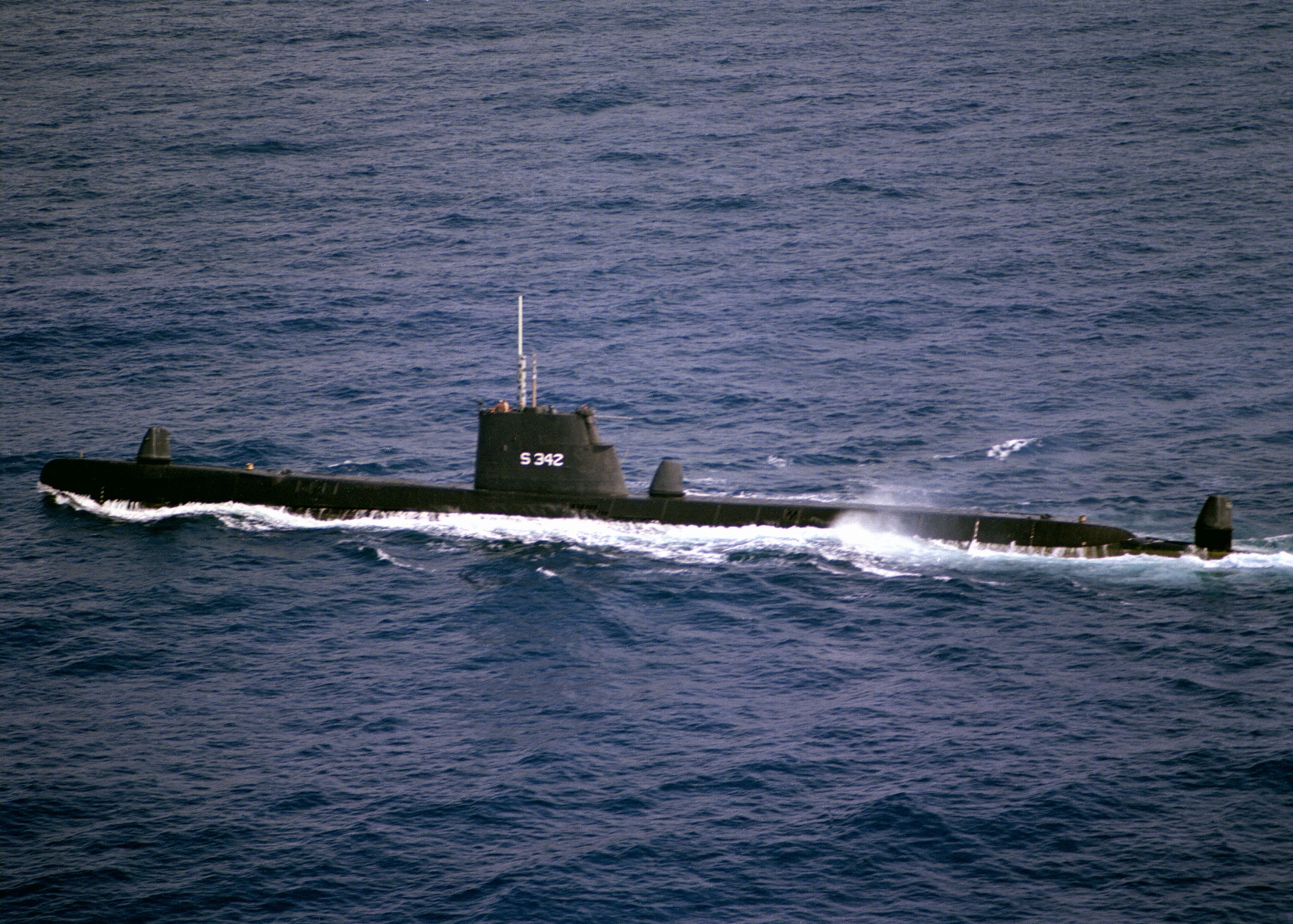 USS Gudgeon (SS/AGSS/SSAG-567), a Tang-class submarine, was the second ship of the United States Navy to be named for the gudgeon, a species of small fresh-water minnow.

Her keel was laid down by the Portsmouth Naval Shipyard in Kittery, Maine. She was launched on 11 June 1952 sponsored by Mrs. Robert A. Bonin, widow of the first Gudgeon's last commanding officer, and commissioned on 21 November 1952 with Commander Robert M. Carroll in command.

After builders' trials, Gudgeon sailed for Pearl Harbor, where she joined Submarine Squadron 1 (SubRon 1), Submarine Division 1 (SubDiv 1), 18 July 1953. Local operations and training exercises continued until 11 April 1954, when Gudgeon sailed to the mainland for antisubmarine warfare (ASW) exercises along the Washington coast. A Mare Island Naval Shipyard overhaul occupied the remainder of the year, and Gudgeon returned to Pearl Harbor 9 March 1955. She sailed 21 Jul 1955, for the first of five WestPac tours, visiting Yokosuka, Formosa, Hong Kong, Manila, and Guam before returning to Pearl Harbor on 30 January 1956. Local operations out of the Hawaiian port, overhaul, special secret operations, and a second trip to the West Coast took Gudgeon through the next 18 months.

Sailing from Pearl Harbor on 8 July 1957, Gudgeon began a history-making cruise around the world, making the Pacific Fleet Submarine Force's flagship the first American submarine to circumnavigate the globe. Navigator was Lt. Leon L. Stine, Jr. After exercises at Yokosuka, Gudgeon sailed west 26 August 1957. As she made her way around the world for the next six months, the submarine docked at Asian, African and European ports before a triumphal entry into Pearl Harbor 21 February 1958, eight months and 25,000 miles (40,000 km) since taking departure.

After extensive overhaul, Gudgeon again settled into the peacetime local and special operations, training exercises, and ASW activities. Three WestPac cruises, in 1959, 1961, and 1963, took her to Japan for exercises with the Seventh Fleet as well as to Subic Bay and Hong Kong for liberty. The alternate years, 1960 and 1962, saw Gudgeon heading back to the mainland, where she trained and exercised along the Washington and California coasts.

Gudgeon returned from the Far East to Pearl Harbor 1 August 1963, and for the next two years operated in Hawaiian waters. She departed Pearl Harbor 29 November and arrived San Francisco, California, on 9 December for overhaul at Mare Island. The ship was cut in half and an 18-foot (5 meter) section was added during a conversion which gave the submarine new and larger engines as well as the PUFFS passive sonar installation. Modernization was completed in April 1967 and Gudgeon returned to duty in the Pacific Fleet.

Gudgeon served in the Pacific until she was decommissioned on 30 September 1983 and stricken from the Naval Vessel Register on 6 August 1987.

In 1983, Gudgeon was transferred by lease to Turkey and renamed TCG Hızırreis (S 342), named for Ottoman Admiral Kurtoğlu Hızır Reis. She was purchased in 1987 and served until 2004. She is berthed as a museum ship at the Kocaeli Museum Ships Command in Izmit and is open to the public.